Paladin is democratizing accessibility to general governance participation by building a one-stop solution for the meta-governance ecosystem of DeFi. In this article, we cover the emerging governance marketplaces on protocols like Curve and Balancer where influence is traded for rewards, and how Paladin is gaining traction with ongoing innovations, most recently its Warden Quest.

With the “Building”-series we pay tribute to portfolio companies that have recently achieved a significant milestone or breakthrough, contributing to an open, decentralized, and more robust architecture of tomorrow’s web.

Paladin is building on top of Curve and Balancer. What makes these decentralized exchanges unique compared to Uniswap is their weekly native token emission of $CRV and $BAL. These weekly emissions are controlled by the holders of each respective token. But in order to exert influence, these tokens need to be locked. With this locking function, users can lock their tokens for up to 4 years which enables them to not only influence the weekly emissions but also receive a revenue share from the entire protocol.

Over the last months, other protocols started seeing value in having power over these weekly emissions. Since start-up protocols can’t spend millions of dollars acquiring and locking these assets for years, a new meta-governance ecosystem has emerged where protocols that want influence over these emissions have started incentivizing holders of locked $CRV and $BAL to vote on their behalf.

As an example, Lido sets up an offer where people can receive $50,000 worth of $LDO tokens in return for voting for Lido’s stETH/ETH pool on Curve. As a result, holders of locked $CRV vote for the stETH/ETH pool in the gauge system and will receive the $LDO incentives. By voting for the stETH-ETH gauge, this pool will receive additional $CRV emissions for the next week. These supplementary emissions of $CRV often hold a greater value than the $50,000 of $LDO offered as an incentive. This is one of the most efficient ways to onboard more users and fuel the growth of a protocol’s ecosystem. From another point of view, the incentives  can be considered marketing expenses, since this strategy can be seen as a much more lean and efficient way to promote a protocol than buying advertisements on Twitter.

The second biggest players, after Curve and Balancer, are Convex ($CVX) and Aura Finance ($AURA). They both offer the same service of “liquid locking” but provide a value-add in terms of liquidity. When locking your $CRV and $BAL on Curve and Balancer directly, you can’t exit this position until the lock expires. If you lock your position on Convex and Aura, you can sell your position thanks to their liquidity pools.

In the field of meta-governance, our portfolio team Paladin has gained a lot of traction in recent months. Paladin started as a lending platform that enables individuals to lend out their voting power in exchange for yield. This means that instead of having to purchase large amounts of tokens in order to exert influence over a governance proposal, individuals can temporarily borrow voting power via Paladin and achieve the same result. This has the potential to revolutionize the way in which meta-governance is conducted by leveling the playing field and making it possible for a wider range of participants to exert influence.

In addition to its initial lending platform, Paladin has developed a novel solution for the DeFi space, known as Warden Boost. This system allows holders of for example locked $CRV to list their boosting power for sale via a non-custodial market. This power refers to the boost system of Curve Finance, which allows liquidity providers to increase their rewards by up to 2.5 times by locking $CRV for a certain period of time. With Warden Boost, individuals can sell their boosting power, much like a limit order, and buyers get the ability to purchase boosts of their rewards at a fraction of the cost of locking a large amount of $CRV. With the introduction of Warden Boost, Paladin has further developed the DeFi space by providing a unique opportunity for holders of locked $CRV to benefit from an additional source of income. It also greatly reduces the barrier to entry for new participants by decreasing the cost of accessing maximum rewards. This innovation promotes greater inclusivity and democratization of the DeFi space, enabling a wider range of individuals to participate and benefit.

Most recently, Paladin launched their latest product, called “Warden Quest”. The Warden Quest is a meta-governance bounty board where protocols can set up “Quests” for token holders of locked $CRV,  $CVX, $BAL and $AURA that come with a monetary incentive. Protocols can specify how much they want to pay per locked token and how many votes in total they want to acquire. Once the required number of votes has been obtained, the quest is closed, thereby protecting early participants from dilution of rewards. The most lucrative quests are usually completed very fast. Currently, most Quests are paying roughly 25% APR for $CRV, $CVX and $BAL votes. Additionally, all of these transactions are being done on-chain and are immutable, meaning both parties can be 100% sure that they receive what they opted in for. 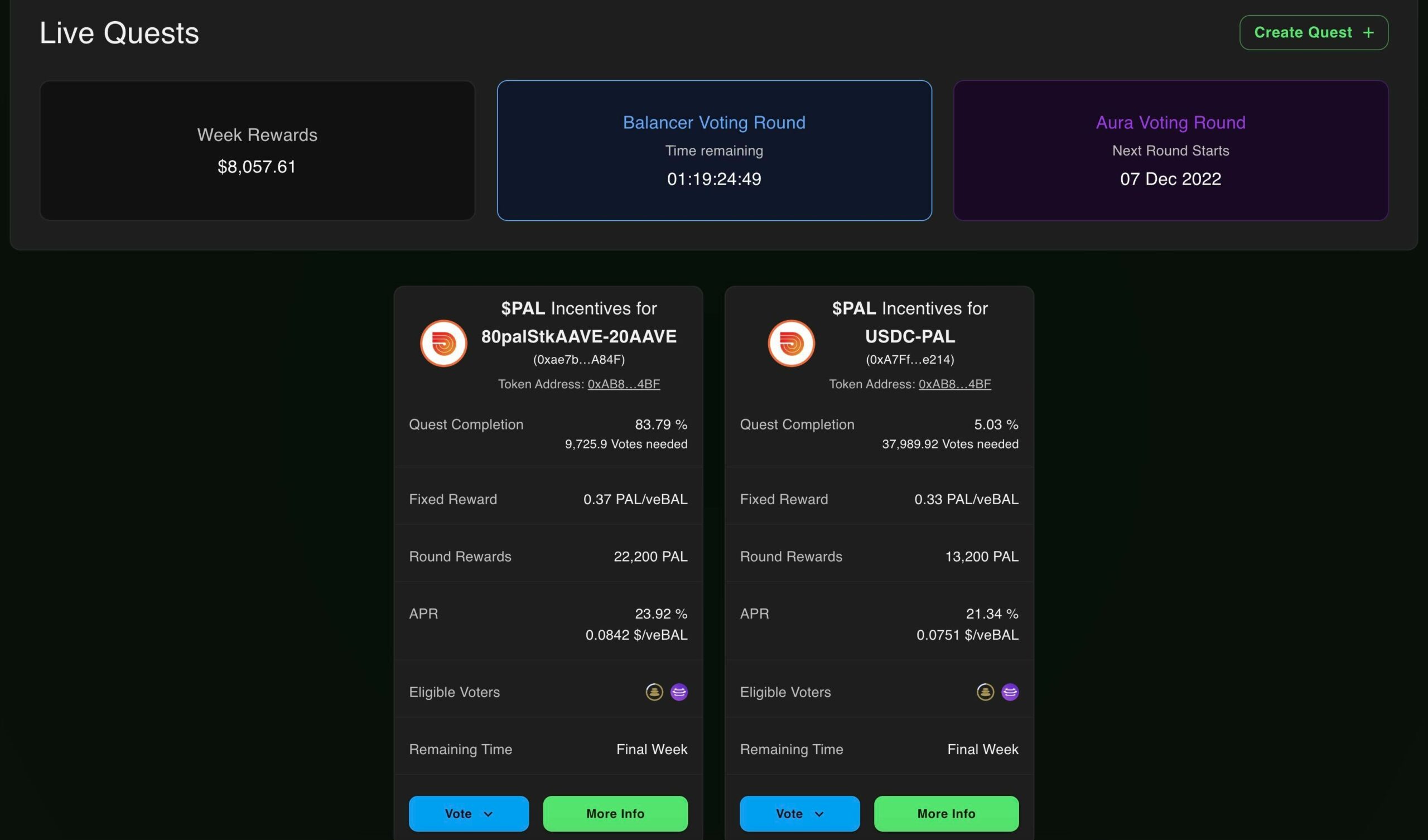 Even during the recent months of market downturn, the Paladin team has managed to onboard a lot of new protocols to deploy new Quests via Warden. The current peak was achieved during November when they had multiple weeks with over $60,000 dollars in Quest rewards distributed through the Quests.

Going into 2023, activity has slowed down a bit but in their recent community call they shared some insights, signaling that more big players are coming soon and that new all-time highs in weekly rewards are on the horizon.

As this space matures and founders keep building in every market environment, we remain highly optimistic and impressed by the continuous innovation and execution of developer teams throughout this cycle. If you want to learn more about Paladin join their Discord or Twitter and have a look at their documentation.