Over the course of 2022, DeFi has matured. We believe this process will continue and accelerate further with yield primitives playing a significant role. Yield Derivatives are an old acquaintance of the financial world. If appropriate protocols succeed in creating meaningful use cases, they could not just enrich the toolkit of experienced DeFi users but also provide DeFi’s master key for mass adoption of TradFi professionals and institutional money. In addition, the DeFi thesis is as strong as ever given the multiple failures of centralized entities over the course of 2022. This is why we’ve been leading the recent USD 2.5 million seed extension round of the DeFi protocol APWine.

“If you don’t know where the yield is coming from, you are the yield” – anon

The topic of yield in DeFi is arguably one of the most vital ones in the crypto space as it is the one that helped it gain broader adoption and is currently used as a tool for anything from user acquisition to revenue distribution, or as means of securing the underlying protocols.

Once we understand where the yields are coming from, the next step is being able to assess, measure and ultimately predict these. Given the variety of sources, as well as dependence on both crypto-internal and macro factors, navigating the volatile yield space in DeFi is not a trivial task, even for the more sophisticated crypto-natives and newly arrived TradFi graduates. 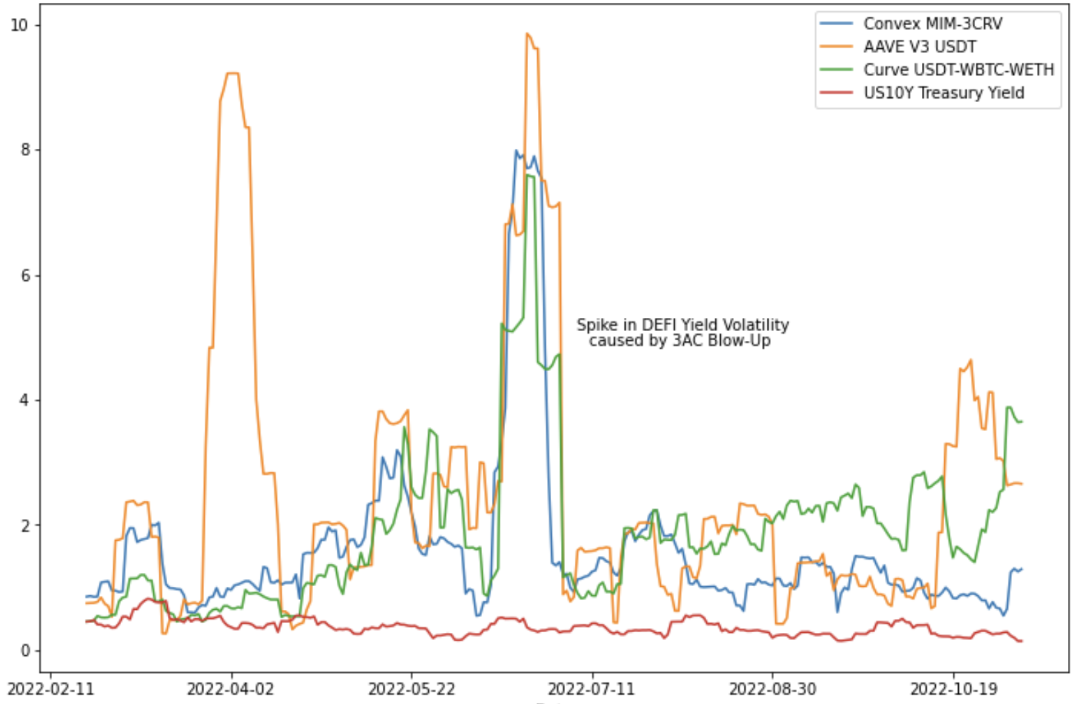 As seen above, yield rates constantly fluctuate with a much larger historical volatility than their TradFi counterparts, resulting in a lack of predictability which is complicating any sort of risk calculation and making the life of honest farmers (and their single % APY honest yields) more challenging.

Indeed, achieving certain predictability of DeFi yields presents itself as quite a challenge. But it is by no means a new one. And therein lies its great potential: Most of the traditional finance risk management strategies are built around yield and various derivatives thereof (e.g. interest rate swaps or IRS). If we ever want DeFi to reach the importance and scale of TradFi and see some on-chain commerce, tools and products around yield are vital.

At this point let’s address the most basic necessity of being able to hedge and lock in future yields.
TradFi asks: “How could we sell our yield in advance (today) and thus be able to lock in the future yield?”
DeFi responds: “By tokenizing Future Yield. This can be achieved by splitting the yield-bearing token into the principal token and the future yield token.”
This is where APWine comes in.

APWine protocol at its core works by enabling users to split the base asset of yield-generating positions (or interest-bearing tokens aka IBTs) like yUSDC or aDAI, into two separate, fungible tokens: the Principal Token (PT), and the Future Yield Token (FYT).

The PT-FYT splitting mechanism allows users to sell their principal at a discount, thus giving users the ability to create a marketplace for fixed-rate income positions. The principal is thus no longer locked up and users may use their newly freed funds to leverage at high multiples, gaining increased exposure to yield without the liquidation risk. The casual user subsidizes the DeFi user’s active strategies by securing fixed-rate yield at a discount on what the DeFi user earns. The DeFi user’s participation subsidizes the value of the fixed rate yield.

This is the composable base-level DeFi primitive which allows new yield products to be built on top.

APWine V2 has just been announced with a set of significant changes coming to the protocol. As V1 is going to be gradually sunset, we will focus on the V2 design.

One of the core focuses of the 2.0 is the implementation of various revenue-accruing mechanisms. The research efforts went into exploring the fee accrual mechanics such as fees on the yield of the iBTs and vault performance fees.

These mechanisms will be implemented in the v2.0’s code from day one and proposed to the DAO in due time, followed by their on-chain implementations with the value of the fee decided by the DAO. Stability and profitability for the DAO are a core focus in this new protocol iteration.

Here we discuss some of many use-cases possible with APWine’s yield primitive.

These were just a few of the potential applications leveraging the two-token (PT/FYT) primitive. APWine being a base-layer protocol creates a design space of products leveraging PTs and FYTs which can be packaged as structured products and offered via easy-to-use vaults.

As the financial primitives become more advanced and the TVL of DeFi grows, so will the demand for yield products. In general, fixed-yield products are useful for more advanced DeFi strategies and serve diversification and risk mitigation. There are a few classes of actors who might want to benefit from these strategies:

From the macro perspective, fixed-income products in traditional finance are a huge market and thus with the expected convergence between DeFi and TradFi or their gradual co-integration, we should expect the demand for DeFi-native fixed-income products to grow on par with its volumes in legacy finance.

The underlying assumption is that the primary driver for the protocol usage and TVL should be the DeFi-native demand first given the longer time horizons of institutional adoption. In the mid- to long-term however, we can expect the convergence between DeFi and TradFi to take place and thus the institutional demand will gradually come to DeFi and likely surpass it in volume.

We are extremely excited for what yield use-cases will APWine and other teams build using APWine’s composable low-level yield primitive.